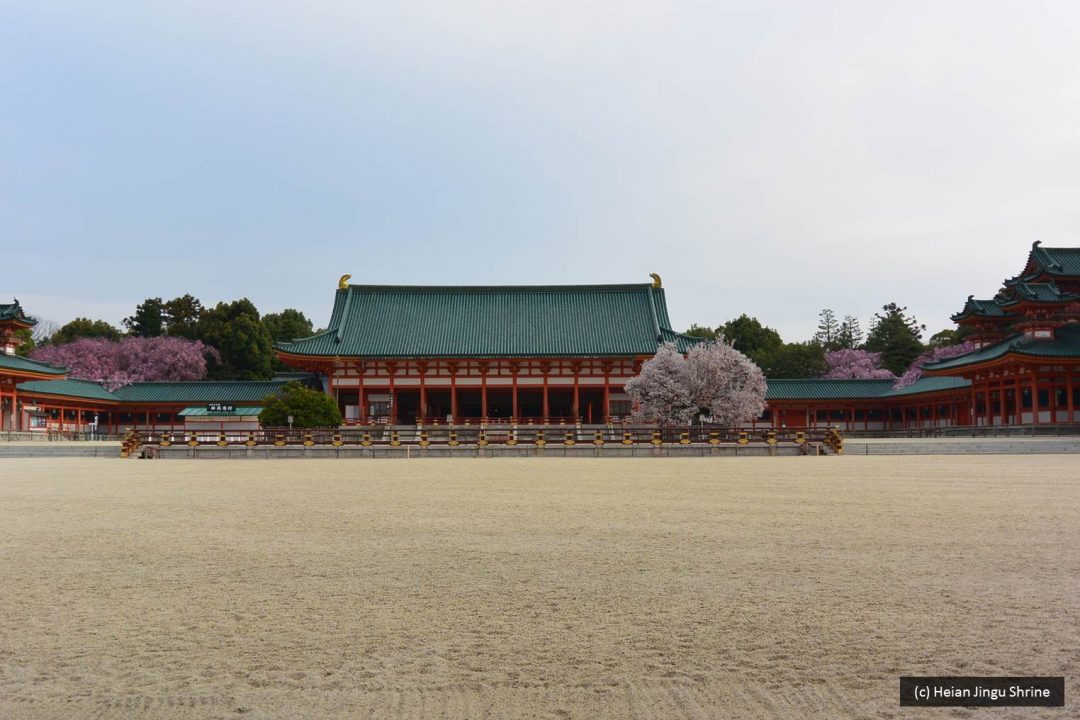 Beautiful vermillion architecture filled with the passion of the Kyoto people

Around 30 minutes from JR Kyoto Station

*Sometimes there are changes according to the season.

*From 7:30 for omamori amulets and shuin seals

*Sometimes there are changes according to the season.

*During all the time periods, reception closes 30 minutes prior to the garden closing time.

Experience Kyoto as it was 1,200 years ago 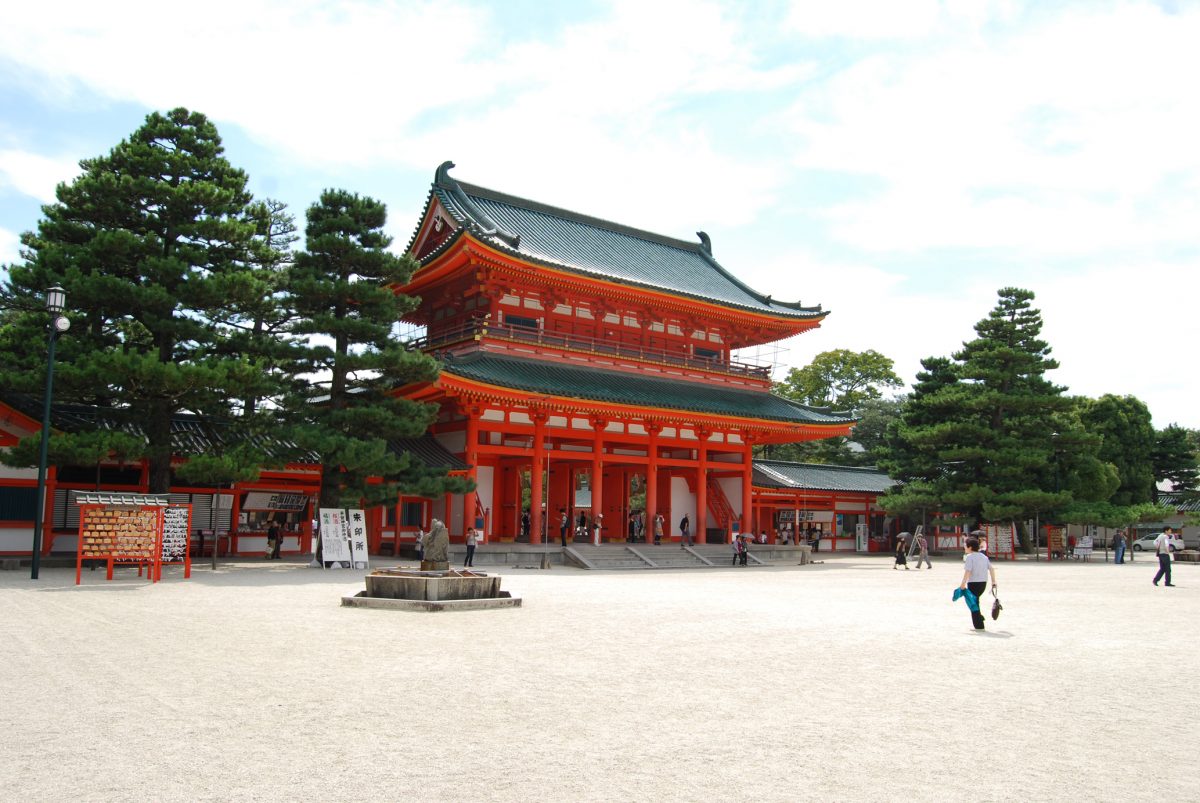 Heian-jingu Shrine is a Shinto shrine located in Sakyo-ku in Kyoto City, Kyoto Prefecture established in 1895 to commemorate 1,100 years since the relocation of the capital to Kyoto (known as Heian-kyo) and to enshrine Emperor Kanmu. In later years, Emperor Komei, the final emperor when Kyoto was still the capital, was also enshrined. The beautiful vermillion main shrine building, which is built in the style of the state chamber of Heian-kyo (Chodo-in), allows visitors to experience the elegant atmosphere of Heian-kyo. In Shin-en Garden, the circuit-style garden that surrounds the main shrine and extends to about 30,000 square meters, you can enjoy seasonal flowers like the weeping pink cherry trees and Japanese irises centered on three ponds: Byakko-ike in the West Garden, Soryu-ike in the Middle Garden, and Seiho-ike in the East Garden. In addition, the large torii gate is widely known as a landmark of the Okazaki area of Kyoto and attracts many visitors.

The Jidai Matsuri traditional festival is a must-see 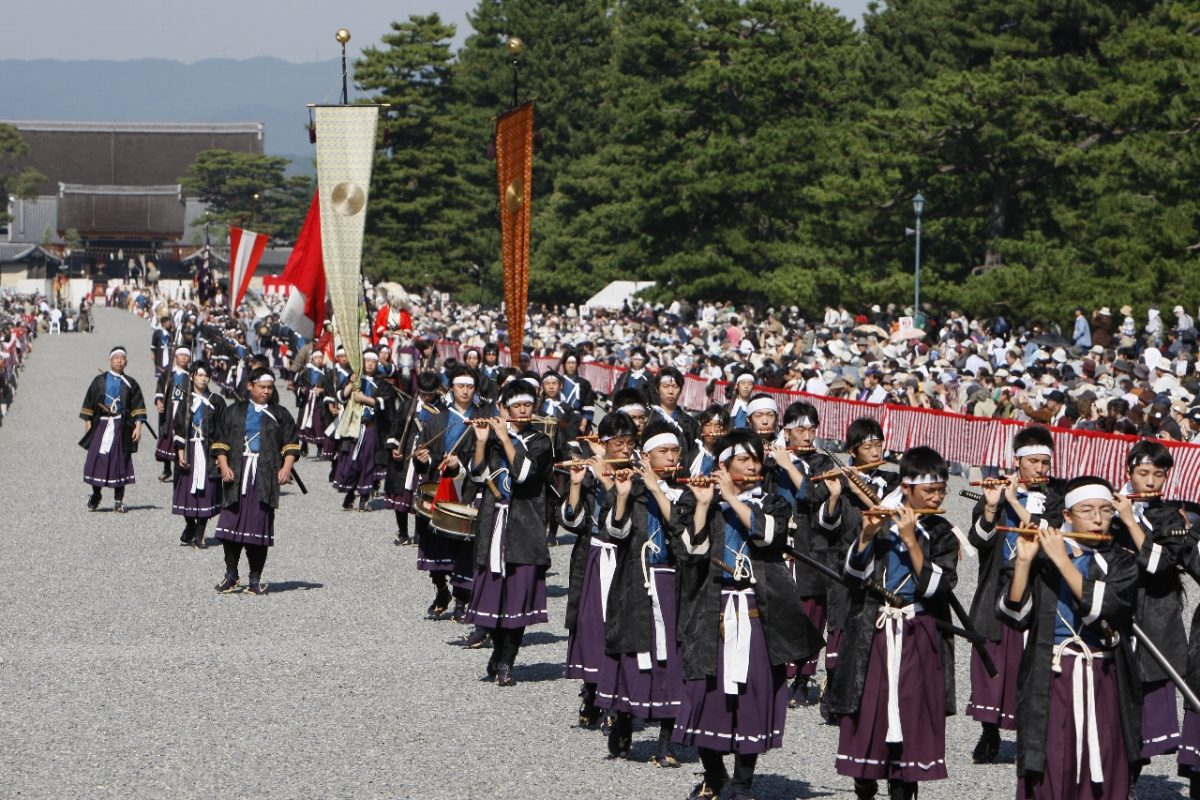 Jidai Matsuri is a grand festival of Heian Jingu Shrine held on October 22 that is one of Kyoto’s three largest festivals.

The festival features a procession that stretches for about two kilometers and marches for about three hours. With the ancient elegance of the timbre of Japanese flutes and drums, it begins with the Meiji Restoration procession group and then moves to the Edo period, Warring States period, Kamakura period, and Heian period for a total of eight time periods over 20 procession groups with about 2,000 participants, including the cattle and horses. The splendid procession is truly a “living period picture scroll,” with exact reproductions of clothing, equipment for rituals, and furnishings from each time period made using traditional Kyoto techniques based on careful research.